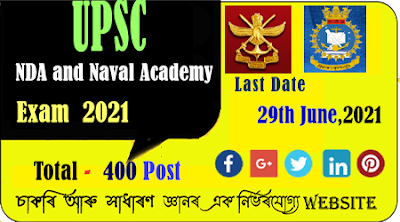 Online applications in the prescribed format are invited for NDA & NA Exam (II) 2021 by UPSC from suitable candidates for Officer Government Jobs (Advertisement No. 10/2021-NDA-II).

The Union Public Service Commission (UPSC) is solely responsible for issuing guidelines for selection and the final conduct of the NDA entrance examination (II) 2021.  Qualification to Join NDA is 12th Class of 10+2 System of Education/Equivalent for Army and with Physics and Maths for Indian Air Force & Indian Navy for the exam NDA Exam (II) 2021.

Physical Standards: Candidates must be physically fit according to the Regulations given in notice.

₹100/- (No fee for SC/ST) to be deposited in any branch of SBI or Online by Net Banking Or by Credit/ Debit card.

How to Apply for NDA & Naval Academy Exam (II)

An Examination will be conducted by the Union Public Service Commission (UPSC) on 05/09/2021 at various test centres across India for admission to the Army, Navy and Air Force wings of the NDA for the 148th Course, and for the 110th Indian Naval Academy Course (INAC). Candidates should note that there will be a penalty (Negative Marking) for wrong answers marked by a candidate in the Objective Type Question Papers.

The subjects of the written examination, the time allowed and the maximum marks allotted to each subject will be as follows:—

THE PAPERS IN ALL THE SUBJECTS WILL CONSIST OF OBJECTIVE TYPE QUESTIONS ONLY. THE QUESTION PAPERS (TEST BOOKLETS) OF MATHEMATICS AND PART “B” OF GENERAL ABILITY TEST WILL BE SET BILINGUALLY IN HINDI AS WELL AS ENGLISH.

Important Dates & Events of this Jobs are as follows: