Let’s know the history of Ayodhya in this way. According to Ramayana, Ayodhya was founded by Manu Ayodhya is one of the ancient and seven sacred pilgrimage centers of the Hindus. It is believed that Lord Rama was born in Ayodhya.Rama’s father Dasharatha ruled here. In traditional history, Ayodhya was the initial capital of Kosala state. During the time of Gautam Buddha, Kosal was divided into two parts North Kosal and South Kosal, between which the river Saryu flowed. Let me tell you, a new settlement was built near Ayodhya in the Buddhist period whose name was Saket. The names of both Saket and Ayodhya are also found simultaneously in Buddhist literature. Ayodhya was settled by Vaivasvata Manu, the son of Vivaswan (Surya) the forefather of Lord Rama. Since then the rule of Suryavanshi kings ruled this city till the Mahabharataperiod. It was here that Lord Shri Ram was born in the palace of Dasharatha. Maharishi Valmiki has also compared the beauty and importance of birthplace in Ramayana to other Indraloks. Valmiki Ramayana is also described in the city of Ayodhya, with incomparable hues and skyscrapers of the city of Ayodhya filled with money and jewels. It is said that after Lord Shri Ram’s water tomb. Ayodhya was desolate for some time. But the palace built on his birthplace was like that. Lord Sri Ram’s son Kush once again rebuilt the capital Ayodhya. After this construction, its existence continued till the last king, Maharaja Brihadbal, for the next 44generations of Suryavansh. Kaushalraj Brihadbal died at the hands of Abhimanyu in the Mahabharata war. Ayodhya became desolate after the war of Mahabharata. But the existence of Shri Ram Janmabhoomi remained. After this it is mentioned that about 100 years before Christ, ChakravartiEmperor Vikramaditya of Ujjain reached Ayodhya by shooting one day. Due to fatigue, he started resting with his army under a mango tree on the banks of river Saryu in Ayodhya. At that time there was a dense forest here. There was no settlement here either. Maharaja Vikramaditya saw some miracles in this land. Then he started the search and by the grace of the nearby yogis and saints, he came to know that this is the Awadhland of Shri Ram. With the instruction of those saints, the emperor built a grand temple here as well as wells, tanks, palaces etc. 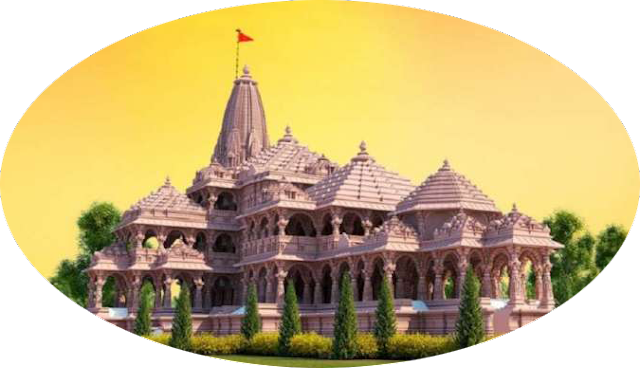 It is said that he had built a huge temple on 84 pillars of black colored stone stones at Sri Ram Janmabhoomi. The grandeur of this temple was built on seeing it. Later kings of Vikramaditya took care of this temple from time to time. One of them, the first ruler of the Sunga dynasty, PushyamitraSunga also got the temple renovated. An inscription of Pushyamitrawas received from Ayodhya in which he is called the Senapati and he describes the two Ashwamedha yagyas performed. It is known from many inscriptions that Ayodhya was the capital of Gupta Empire during the time of Gupta dynasty Chandragupta and for a long time thereafter. After this, in the 11th century AD, Kannauj King Jaichand came and he inscribed his name on the temple by uprooting the commendation inscription of Emperor Vikramaditya. Jaichand also came to an end after the battle of Panipat. After this, the attack of invaders on India increased further. The invaders looted Kashi, Mathura as well as Ayodhyaand continued the process of breaking the idols by killing priests. But till the 14th century they were not able to break the Ram temple in Ayodhya. Even after various invasions, the grand temple built on the birthplace of Shri Ram survived all the troubles till the 14th century.

It is said that the temple was present here during the reign of Alexander Lodi.In the 14th century, the Mughals took control of Bharatand only after that many campaigns were carried out to destroy the Ram Janmabhoomi and Ayodhya. Finally in 1527-28 this grand temple was dismantled and replaced by the Babri structure. It is said that a commander of Babar, during the Bihar campaign by breaking the ancient and magnificent temple located at the birthplace of Shri Ram in Ayodhya. The founder of the Mughal Empire, had built a mosque, which existed till 1992.