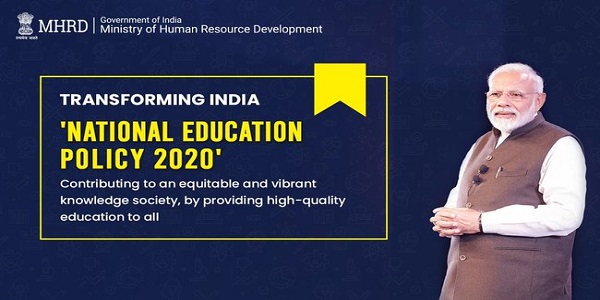 Today we are going to discuss about the good and bad of new National Education Policy 2020.

Why is education system so poor in India?

What changes can be brought about and what can we learn from the developed countries?

Today, it is very happiest moment to say that the new education policy that our government has brought in. They have addressed almost all the major points of criticism in their new policy and they have brought a revolutionary change in the Indian education system. We are saying that in a positive step, they’ve taken a very good step.

Come, let us find out. One of the first and major points of criticism is that our educational system tries to fit the students into three categories after class 10 that is Science, commerce and humanities. And this is very problematic- If you chose one stream, then you cannot study the subjects of the other streams. But more often than not, the students are interested in a variety of subjects.

What could I have done?

But now, the government has changed this. Now, the students have more flexibility to choose their subjects. Upon the implementation of this policy, a student can study Political science with Physics and Chemistry with History. A student can study Science, commerce as well as Arts subjects. This is an amazing initiative. And I feel jealous as a 90s kids.

We were compelled to choose amongst the three. Now, the students would have so much more flexibility to choose.

A second major change by the government is that they have replaced the existing 10+2 academic structure with the 5+3+3+4 system now.

Now, it has become more similar to the education system of the western developed countries.

In this new system, education would now start at the age of 3

Preschool would be from the age of 3-6 and then class 1 and 2 for the next two years. Then would be the “preparatory stage” for the next 3 years in which focus would be upon playing, discovery and activity based classroom learning.

Class 6 to 8 would be the middle stage in which experiential learning would be focused upon-sciences, mathematics, arts, social sciences and humanities. Next would be the secondary stage of class 9-12 in which multi-disciplinary studies would be focused upon. Students would be provided with more flexibility and more choices. The job of selling, or working in a supermarket, or driving, plumbing, carpentry, gardening… all the jobs like these  that do not come under the proper purview of engineering, humanities or universities.

All that is viewed on the extra side, they are vocationally trained up to a large extent.

– A vast difference is that in India, we view these jobs at a very low level. We look at things and presume that the people of the lower (caste/class) do these kinds of jobs and our parents poke fun and say that if you don’t study, will you do carpentry and become a carpenter? Or a plumber?

The difference (here) is that these jobs are given the same respect in Germany. It is found that vocational training is given a lot of importance in developed countries. The jobs like welding, electrician, carpentry, plumbing, and these jobs are viewed at the same level as the rest of the skilled jobs. In India, these jobs are looked at with disdain, which is a mindset that needs to change.

The government has implemented some structural changes to change this mindset, which is praiseworthy for example, right from class 6, students would have to do internships in vocational training jobs. The students would be imparted experience in such jobs. There would be a bagless period of 10 days- where he students would take no bags to school but experience jobs like- carpentry, welding, gardening.

Vocational training in schools would be focused upon even later. This is a very critical thing without which, in my opinion, we cannot become a developed country until and unless these changes are implemented

The government has fortunately taken a step in the right direction regarding this Coding would be taught to children from class 6 and the importance accorded to board exams in class 10 and 12 would be reduced.

Another interesting and positive policy change is that the report cards handed to students at the year end that is, the progress report. Until now, the teachers assess how the student has performed in the entire year, according to them.

Now, assessment will be done by not only the teachers, but the students will also self-evaluate themselves and say how have they performed in the entire year, according to their perspective.Not only will there be self-evaluation, the rest of the students of the class with also evaluate and say how a particular student has performed according to the perspective of the rest of the classmates

This is a very useful step. Because critical thinking is a very important aspect- to evaluate oneself by oneself to think about what one is doing and critically analyze one’s own decisions

And in the coming life…

We are told how we are performing by our teachers and parents, when we are in school. But when the school and college life gets over, there is no one to tell you how your performance is going. You have to do a self-evaluation of how you are performing in life and what you want to do ahead in life.So, this thinking should be imparted at an early stage to the students to evaluate oneself and to see what others think about you and what your evaluation is, from their perspective. It is very useful

Right now, it is around 3%- which is insufficient. And compared to the developed countries and the rest of the developing countries, India spends very less on education in measure of the percentage of the GDP 6% is a great target. But a lot depends on implementation as well- How soon is the government able to achieve it. But obviously, as a first step, setting a target of 6% is commendable.

There was a problem of rote learning in the Indian education system. Most of the exams are designed in a way that we need to memorize things. And all that we learnt, evaporates in a few months because we gave exams by rote learning. So, the government has also said that it would try and change this as well.

The exams would be designed a way that would not require much memorization or rote learning. But how exactly this will be achieved is not clearly mentioned. So, it remains to be seen. We are hopeful that positive changes will be implemented here as well.

Talking about education after class 12- there is a multiple entry and exit programme. It means that- say, you started a degree- B.Tech degree and one year later, you realize that you do not want to continue with it because you don’t like it so, you can drop midway. All the subjects that you have studied for one year, you can take their credits and get it transferred to another degree. This is extremely useful and already exists in most of the developed countries. It’s great that this option will be available in India as well. This option now includes another feature- say the degree is of four years. If you drop out after one year, then you will get a certificate. If you drop out after the second year, then you will get a diploma. After three years, you will get a bachelor’s degree and after four years – a bachelor’s research degree. If you have already done a four year degree in bachelors, MA and MSc degrees would only be of one year and two years if you have a bachelor’s degree of three years.

This is again consistent with the international standard. Top 100 foreign institutes have been given permission to set up their campuses within India.

What’s interesting is that this is a policy that Congress wanted to bring in when it was in power but back then, BJP had opposed it. And now, it itself is bringing it in.

A common national professional standard will be set for all the teachers by 2022.A four years integrated BA degree would be the minimum qualification required to become a teacher by 2030.These were the positive points brought by the government in this new policy.

Let us now talk about the negative/controversial points which are being criticized by the people. This new policy has been criticized the most on the point of language. This policy reads that, “wherever possible the medium of instruction till 5th grade and preferably till class 8 and beyond will be the home language, local language or the regional language”

That is, the education of the child until the 5th grade should be in home language, mother language and regional language. It is nowhere written that doing so is compulsory. But those who criticize it say that this will force the schools to not teach in English and instead teach in regional languages which will not be beneficial for most of the people.

Say, you live in Kerala and your child has studied until class 4 in Kerala. Thereupon, you shift to Maharashtra Most of the schools would teach in Marathi in Maharashtra and the child will not be able to adjust. This would restrict the movement of the people from one state to another and this might have a detrimental effect. It is written in the policy that no language would be forced. Although, it is also said that they would try to make Sanskrit and other classical languages available at every level in schools as an option and after class 9, the options of foreign languages will also be available like they are right now

It is important to give priority to English because today, English, in a way, has become a global language of communication worldwide. No matter which country you come from, I believe it is essential to learn English if you want to do anything at an international level. It is becoming essential to learn English in every country. And this is an advantage for India in comparison to China and the rest of the South East Asian countries because there, people are not able to learn English to this extent. Since people in India speak English, they are able to compete in western countries, US and Europe

Second- Several student and teachers’ bodies have criticized this policy of being anti-democratic. Some parties have also criticized it. It is allege that the states were not consulted before making this policy. Since education is a concurrent subject that comes under both the Centre as well as state.The states should have been consulted more before introducing this policy. It is also alleged that this policy promotes centralization because this policy has a point that new teachers’ training board will be set up for all kinds of teachers in the country and no state can change that. The power has been taken from the states and placed with the central government. The powers have been made more centralized that the decision making regarding education would be done by the center.

And finally, some points of criticism said that this policy is very theoretical. It does change things theoretically. But to implement them practically in real life is going to be a very long drawn and difficult process because there are so many government schools where children in the 5th class have no teachers and sound infrastructure is not available in schools.

The students are not educated properly and they drop out early. There are so many government schools with a serious dearth of available teachers so how are they going to impart vocational training and give the option of variety of subjects to children. All this seems impossible to give.