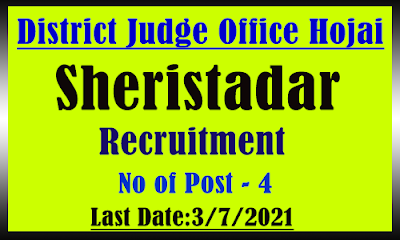 Applications are invited from intending eligible candidates, who are citizens of India as defined in Article 5 and 6 of the Constitution of India, in the prescribed Standard Form of application for filling up vacant posts (highlighted hereunder in the table) in the establishment of District & Sessions Judge, Hojai as per Sanction Order No. JDJ-1101697/2017- ESTT-JUD/-Judicial/35dated 12.03.2020 of Judicial Department, Government of Assam.

The qualification and eligibility criteria are set forth in the table against the posts after taking into due consideration the qualifications mandated by The Assam District and Sessions Judges Establishment (Ministerial) Service Rules, 1987.

How to Apply for Sheristadar Recruitment 2021

The applicants must submit their applications in the Standard Form of application published in Assam Gazette Part-IX (annexed with this advertisement).

Completed applications along with all testimonials as mentioned above should be addressed to “The Office Of District & Sessions Judge, Sankardev Nagar, Hojai, 782442” through post or may be placed in the box labelled as ‘Drop Box for Applications’ which will be placed inside the premise Of the court of the undersigned.

The intending candidates shall submit their applications through proper channel including experience certificate issued by the respective District and Sessions Judge or equivalent courts along with copies of service- book, five years ACRs with proof Of requisite educational qualifications. Candidates must be an Indian Citizen as defined in Article 5 to 8 of the Constitution Of India.

The selection for the above-mentioned posts would solely be based upon the candidate’s performance in interview/viva-voce and work experience. The date of interview will be intimated in due-course of time in the official website.
A provisional ‘Select List’ and ‘Reject List’ will be notified in due course of time in the official website Of  Hojai Judiciary, viz. https://districts.ecourts.gov.in/hojai
Last date for receipt of applications is 03.07.2021. Drop Box will be closed after the said date.