It Is hereby notified for information to all concerned Officers that the next Half Yearly Departmental Examination will be conducted by the Commission at Guwahati/Jorhat/Silchar & Shillong. The Dates, Venues and Programme of the examination will be notified letter on.

As per Govt. letter communicated vide Memo No.HMA.46/2010/235-A, dated 13th October, 2011, Officers in the rank of Inspector of Police are not permitted to appear In the Half Yearly Departmental Examination conducted by the Commission for IAS/IPS/ACS/ALRS/APS etc. officers till they are promoted to APS Junior Grade.

Non-Gazetted Police Officers will appear at the examination to be held at the Headquarter of the District in which they are serving under supervision of a separate local Examination Board in each District, which shall be conducted simultaneously with the examination on Police Law and Languages of the half Yearly Departmental Examination.

The Officers who intend to appear at the Examination to be conducted by the Commission should download the Prescribed Form viz.: -Application Form for Half Yearly Departmental Examination 2020″ from the Commission’s website www.apsc.nic.in and submit the filled in Application Form to the Secretary, Assam Public Service Commission, Jawaharnagar, Khanapara, Guwahati — 22 through Deputy Commissioners. SDOs with intimation to the Govt. in the Personnel(A) Deptt. in case of IAS & ACS officers and through their District/Sub-Divisional Heads under intimation to their Administrative Deptt. In case of Officers of other Deptts. as laid down in Govt. Circular No.AAP. 196/ 62/221. dated 29.07.1963. Applications not routed through proper channel shall not be entertained.

THE LAST DATE FOR RECEIPT OF THE APPLICATION IN THE COMMISSIONS OFFICE IS 30.09.2020. 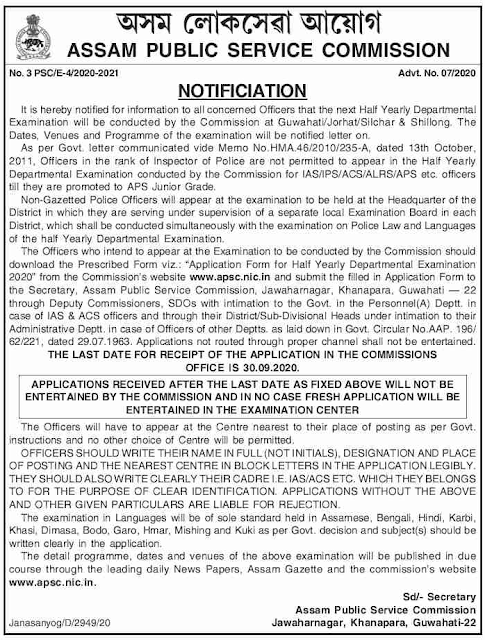